As an established contemporary 80s-generation Chinese artist, Cai Lei (蔡磊) possesses all the fundamental qualities that will pave his journey towards achieving international recognition. Born in a family of artists, Cai developed a passion for art and honed his artistic abilities from a young age. He proceeded to undergo professional training at the Lu Xun Academy of Fine Arts and the renowned Central Academy of Fine Arts, Beijing.

Throughout his formal training, Cai has always demonstrated a unique sense of aesthetics that differentiated him from his peers. Combined with his remarkable level of technical skills, perseverance and dedication towards expressing profound ideas, his artworks can be deemed as both exceptional and extraordinary. Cai’s father, a traditional Chinese artist, had a significant influence on the artist’s style. Cai said, “My father also painted nature. He used pieces of glass as his medium by fusing together two pieces of glass. As a result, his artworks have an element of surprise and unexpectedness.”

He continued to maintain his father’s traditional artistic values in his works but his inquisitive nature also spurred him to examine modern objects that ultimately informed his artistic process. However, the artist refrains from following art trends blindly; he believes that art should be a representation of one’s individuality in terms of thoughts and expressions. Cai’s impressive artistic principles have undeniably contributed to the uniqueness of his works.

Upon graduation, he chose to focus on sculpture – a department that was unfamiliar but appealing due to the challenges it posed. His sculptures are impeccably detailed and hyper-realistic – proof of the high artistic standards that he commits himself to. In response to an interview regarding his creative process, the artist commented, “I like my artwork to be clean-cut with a focal point. While sculpting, I ensure that there is always a single specific point that captures the viewer’s attention; the rest just play a supporting role.” 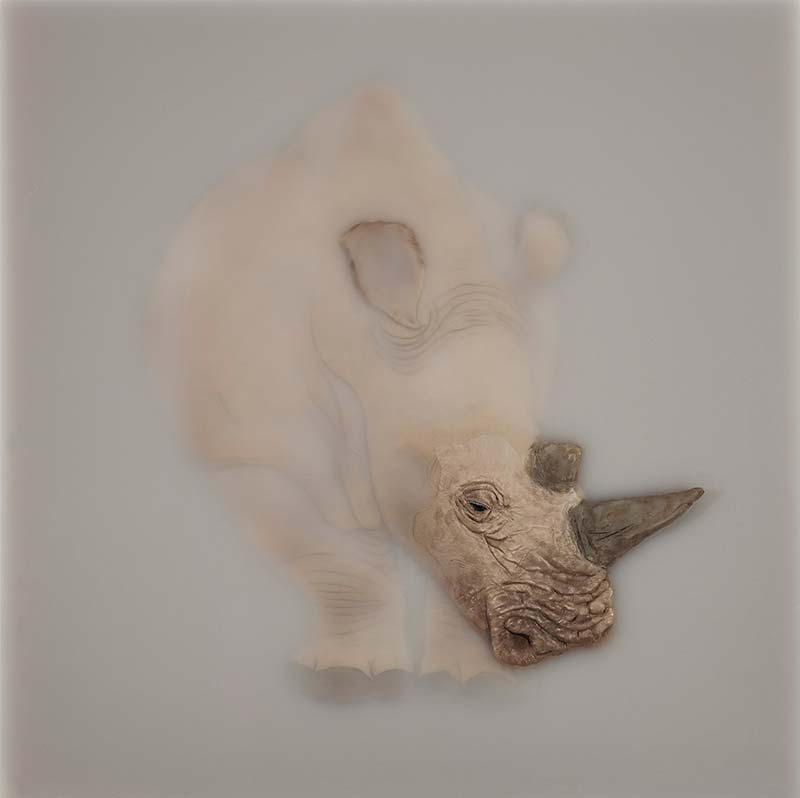 Selecting the right materials to sculpt is a very intimate process for Cai, who is interested in the origins and quality of substances such as skin. He explains, “I see consumer goods, such as bags and shoes, that are made of skin in the market. I feel that skin is a byproduct of life, which has been rendered inanimate after being processed by humans. My art revolves around resurrecting it and breathing life into the skin again.”

Cai’s works can be considered as man-made – creations of an unnatural world. Originally, the artist drew his inspiration from the experiences of inhabiting in the desolate living conditions of Beijing. In the midst of industrialization, where nature has been replaced by concrete, he believes that the fate of humans become congruent to that of animals. Cai’s rejection to this phenomenon is expressed through heated mud to combat the cold and lifeless concrete in his artworks.

Cai Lei remarked, “I am always observing and processing the things that I encounter in my life on a daily basis. I will then recreate and transform it into a 3-D sculpture using ‘real’ material. At the same time, this visual illusion can change the viewer’s experience, establishing a juxtaposition between hyperrealism and the absolute truth of reality.”

Master of Illusion – Introducing Cai Lei2017-07-292018-05-05https://asianartplatform.com/wp-content/uploads/2019/07/logo-original.pngAsian Art Platformhttps://asianartplatform.com/wp-content/uploads/2017/07/cai-lei-master-illusion.jpg200px200px
About
Ben Rush
Ben is responsible for our website and digital marketing at Asian Art Platform. An avid art collector, he combines his passion for art and digital to ensure our website is the best in the industry.